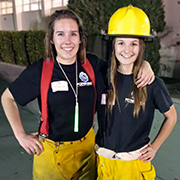 ROP Fire Technology students at La Habra High School led North Orange County ROP in collecting over 200 toys for The Spark of Love Toy Drive, a cause that aims to ensure that each child across Southern California receives a new toy during the holiday season. This drive, hosted by the Southern California Firefighters and ABC7, has successfully collected over 7.5 million toys for under-served children in the past two decades.

Scott Semer, ROP Emergency Medical Responder and Fire Technology Instructor, initiated participation in the drive by asking other teachers to get involved. In his invitation to participate titled “Calling all Heroes,” Semer stated, “When I got injured as a firefighter, I thought my hero days were over, but I was wrong. Teachers can be the biggest heroes of them all. This is a way to make every kid have a smile on Christmas.”

Throughout December, staff and students worked together gathering toys to their local high schools. As school let out for winter break, Semer and students rented a truck to pick up and transport the toys to a nearby fire department. From there, toys were distributed locally.